Most people would pass up the opportunity to explore an abandoned insane asylum. Urban explorers are among the few groups of people who would dare venture inside one of these buildings, knowing full well that these locations contain an overwhelming amount of negative energy and creepy history.

Asylums in Texas were operational for 100 years. Beginning in 1861 with the opening of the State Lunatic Asylum in Austin, until 1961 when the words ‘lunatic’ and ‘insane’ were removed from the facility’s names. But it wasn’t the use of these words that gave the asylums their infamous reputations, but the medical procedures that patients underwent.

Truly sick people came to these asylums looking for treatment, only to endure deplorable conditions and highly questionable forms of therapy. These locations although no longer in use are still standing all over Texas even today. Many of them have been shut down for decades but the buildings remain intact and forgotten. Below is a list of abandoned asylums in Texas and some of their history.

Looking for more abandoned sites in your state? See our guide on the best forgotten places in the state of Texas.

The proper use of the building located on S. Presa road past Loop 410 in San Antonio, Texas, is highly debated. Some say it was a poor house while others assert it was an asylum for the mentally ill. From reports I read online, I found evidence that this building was indeed an insane asylum where patients underwent medical treatment.

If the reports I read paint an accurate picture of what occurred in this building, then this abandoned insane asylum in San Antonio was the final resting place of numerous people that came here seeking treatment only to endure harsh conditions and inhumane forms of therapy.

Many people mistake this abandoned asylum as being the ‘San Antonio State Hospital’, but the state hospital is still standing today and fully functional just miles away. It is unknown when this asylum first opened its doors as much of its history is shrouded in mystery, perhaps to hide the atrocities that occurred here? Who knows. The asylum is comprised of 4 structures that all still stand, the main facility, guard shack, maintenance building, and disciplinary unit. The last building, located at the back of the property, is supposedly where electroshock therapy took place. Disobedient patients were doused in water and shocked with an electric current on their heads to induce a short seizure.

This practice supposedly helped patients dealing with severe depression. Other brutal “treatments” patients went through include ice baths, purging, bloodletting, straitjackets, forced drugging, and even lobotomies. Boysville was closed down and abandoned sometime in the late 90s.

Urban explorers who have ventured into the place have concluded that the asylum was left in a hurry, because of the many papers and equipment left behind. Reports of the asylum being haunted are also mentioned. 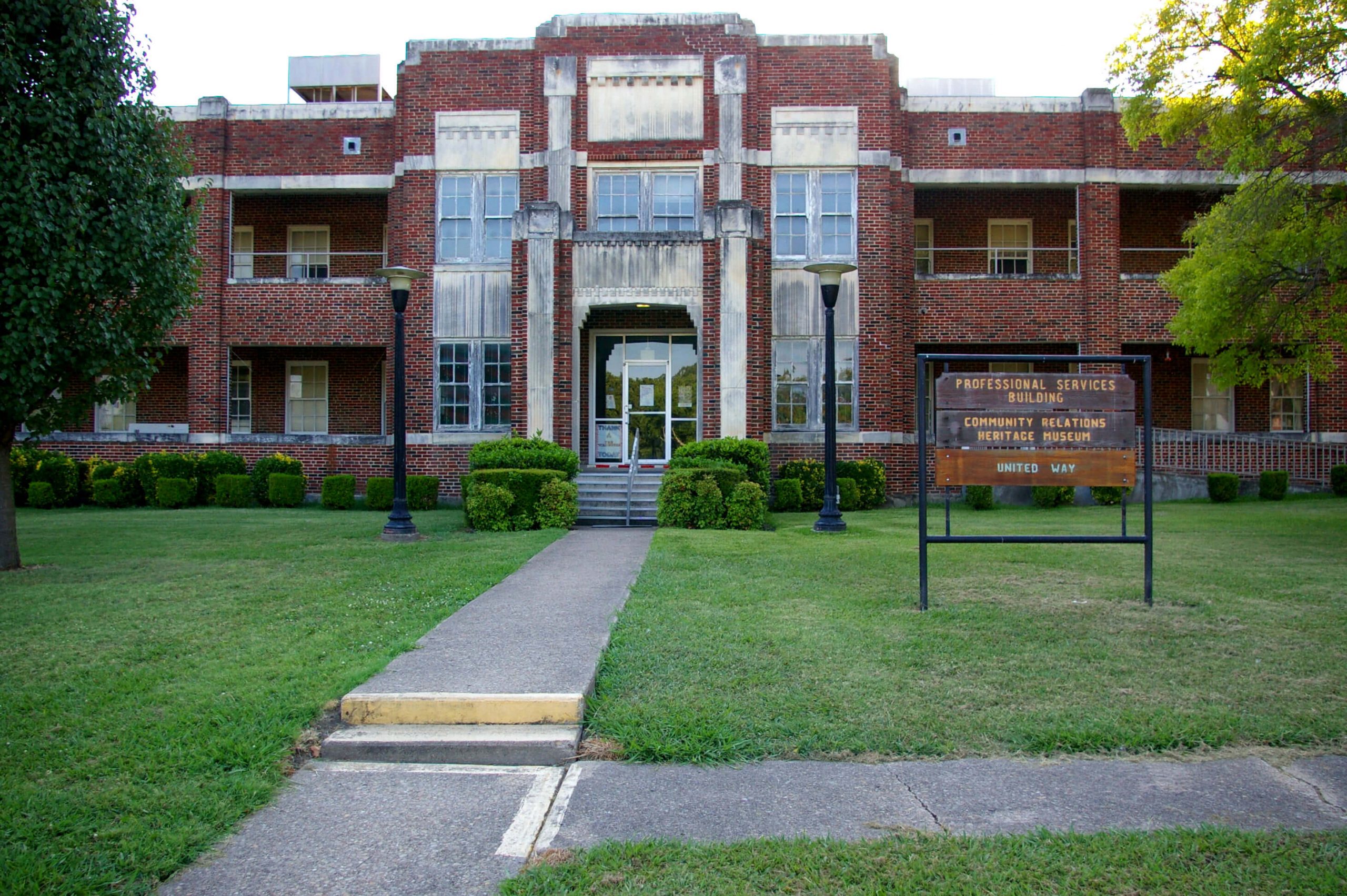 The building was designed according to the Kirkbride Plan which is a style of architecture that prioritizes natural sunlight and air circulation that supposedly helped mentally ill patients. During its first year in operation, the hospital treated 300 patients. It would explode in admittance in the following years which would lead to problems with overcrowding, patient neglect, and death.

At its height, it housed and provided treatment to over 3,500 patients, with many of them having some sort of mental illness that required daily treatment and care. Overcrowding was an issue at Terrell and patients would routinely be left untreated, unfed, and neglected. It wasn’t uncommon for nurses to walk into a patient’s room and find them dead due to different reasons. 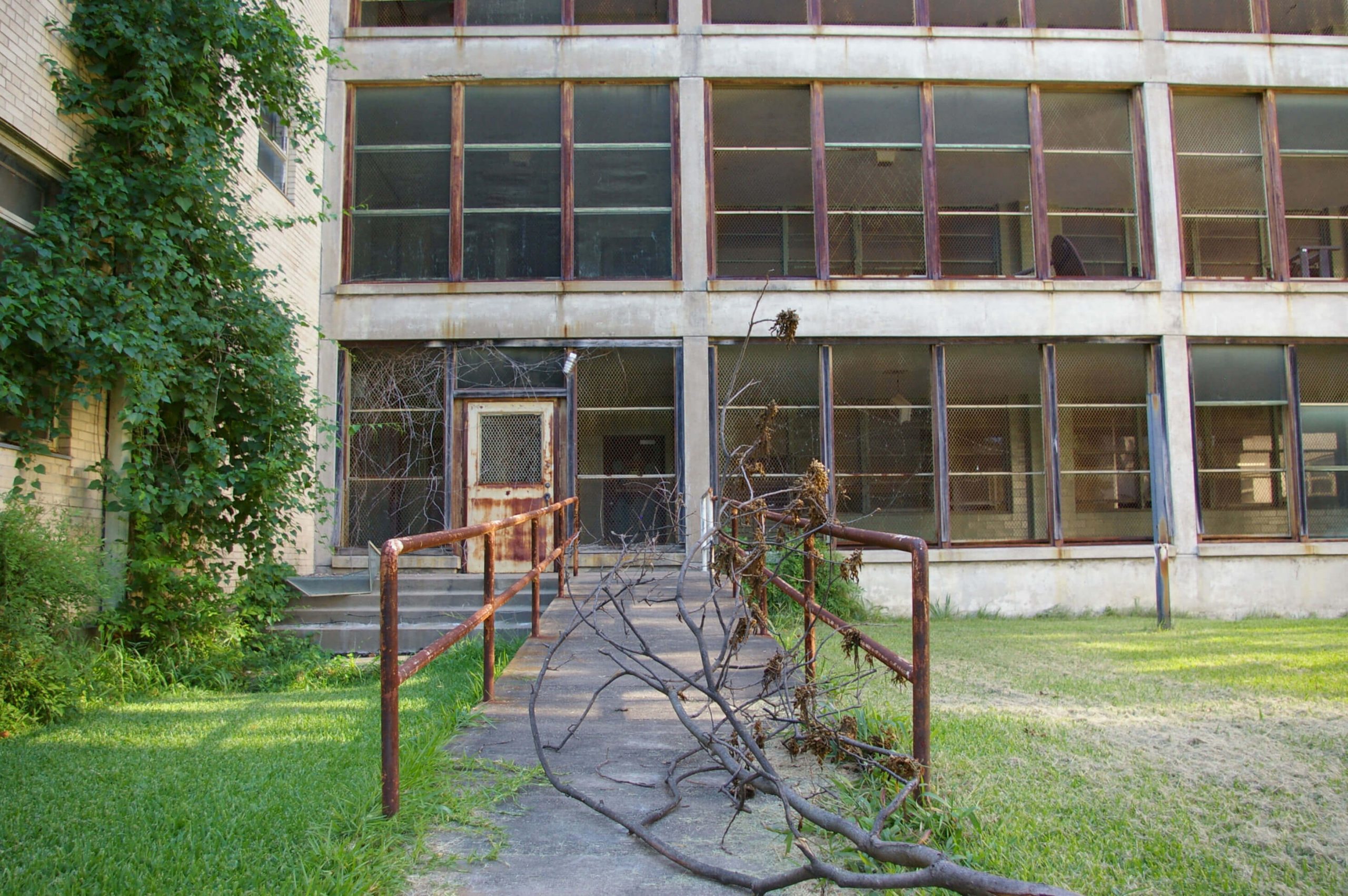 Patients would clash with each other, and disobedience and bad behavior was a problem too. The hospital faced backlash when they started offering their patients ‘workshops’ in which patients were put to work being paid pennies all while the admins and hospital profited from their work.

By 1980 Terrell State Hospital was declining in patients as the US government began a movement to reduce the number of patients institutionalized in psychiatric hospitals around the nation. Admission numbers kept declining until 1993 when sections of the hospital were closed down and abandoned.

Today some sections of Terrell State Hospital lay in ruin and complete darkness. Many horror stories have circulated for decades about what occurred inside the hospital. Known to locals as the Old Insane Asylum, the Dr. White Sanitarium in Witchita Falls, TX, is sure to spook and intrigue you. It opened in 1926 and was run by Dr. Frank S. White who was the former superintendent of the Austin State Hospital.

He believed that mental health treatment in the United States was heading in the wrong direction with huge institutions and forcing patients to be confined to rooms like prisoners. So he left his post at Austin State and opened his own asylum. He set out to run his asylum in a more humane manner. Patients seeking treatment at Dr. White’s Sanitarium would be free to roam the halls of the facility and were offered several amenities.

Though he still practiced controversial medical procedures like electroshock therapy and lobotomies, which at times left patients with brain damage, he believed he was doing the right thing. The sanitarium ran for a few decades before heavy storms damaged the building in 1950 and forced its closure. Since then it’s been sitting empty and forgotten.

In the many years since its abandonment, thrill-seeking teenagers in the area would often explore the facility as it was a well-known haunted hangout spot. Years of rumors of the sanitarium being haunted reached a group of paranormal investigators in Texas and in 2008 a site-wide investigation was conducted.

They concluded that the facility was most definitely haunted as apparitions were seen, disembodied voices were heard in EVPs, and 2 men were pushed and scratched. Dr. White’s Sanitarium is one of the most well-known abandoned asylums in Texas. You can read more about it here. 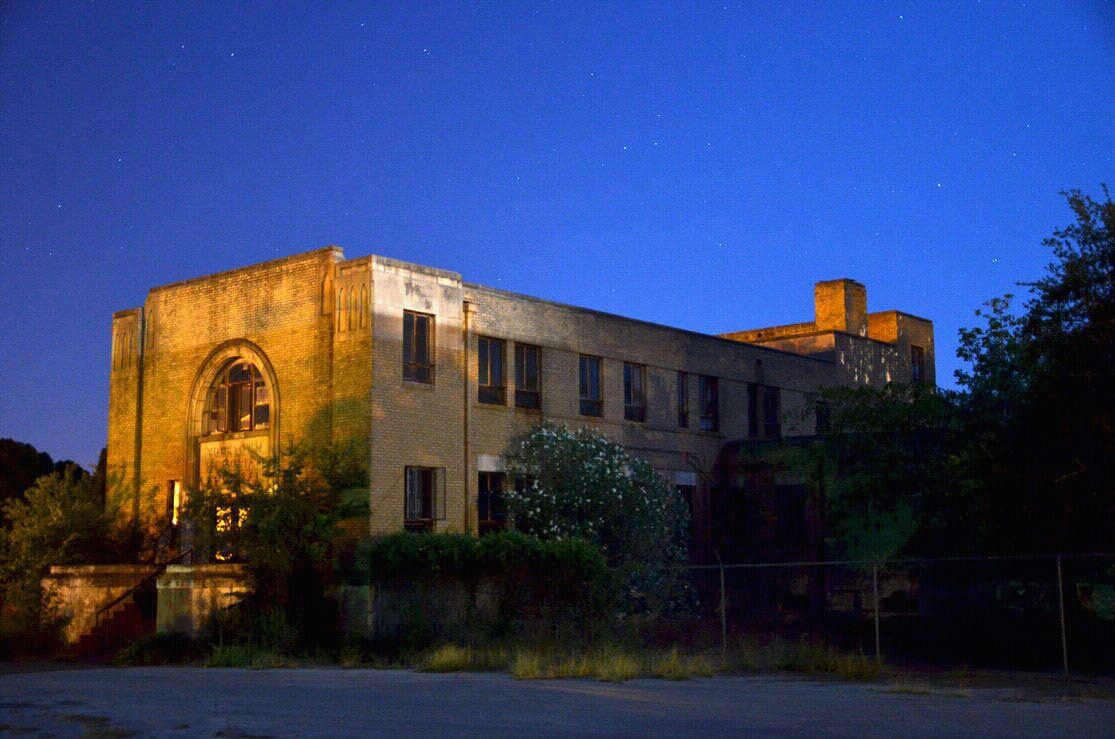 If you were to drive 80 miles southeast of San Antonio towards the city of Yorktown, you will encounter an abandoned hospital that has been called the “most haunted place on earth”. It was founded in 1951 and was run by the Felician Sisters of the Roman Catholic Church. Even though it operated as a hospital and at one point a drug rehab center, mentally ill patients stayed in the facility for extended periods of time.

An entire wing of the hospital was dedicated to the treatment of patients who were suffering from illnesses such as schizophrenia, severe anxiety, and depression, to name a few. Many patients endured treatment that would not be accepted by today’s standards. 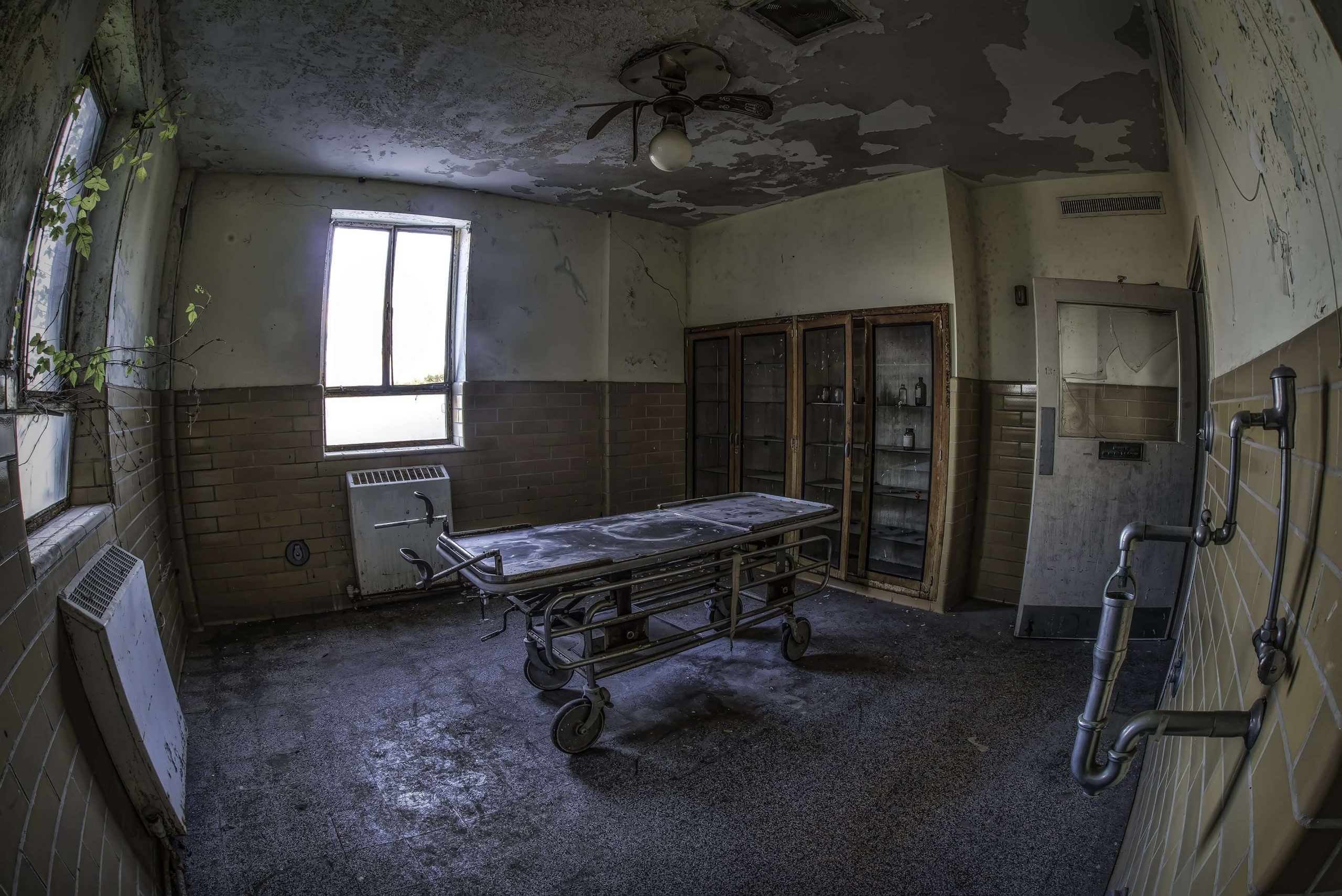 The hospital operated for 30 years before shutting its doors in 1980 for unknown reasons. Since it was abandoned it’s become a hotspot for teens, urban explorers, and ghost hunters. Everything from moving objects, to creepy sightings, and doors slamming shut have been reported happening inside Yorktown Memorial Hospital.

Explore this abandoned place in Texas at your own risk. Also, be sure to know if it’s legal to explore by reading our guide on the legality of exploring abandoned buildings. 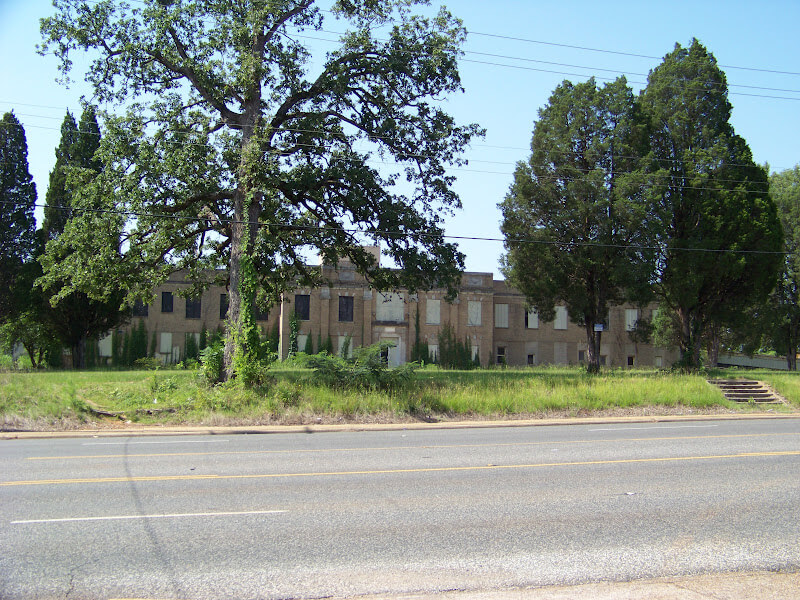 If you pass through the center of Marshall, TX, you will come across a two-story building with boarded-up windows that are covered in moss and vines and surrounded by overgrown grass that looks like it could be the location of Hollywood’s next biggest horror film.

The building is actually a hospital that’s been abandoned for decades. It used to serve all employees of the Texas & Pacific Railroad staff if they needed medical care. A section of the hospital was temporarily used to treat the mentally ill and those deemed mentally insane. It opened in the early 1920s and closed down 4 decades later in the late 1960s. 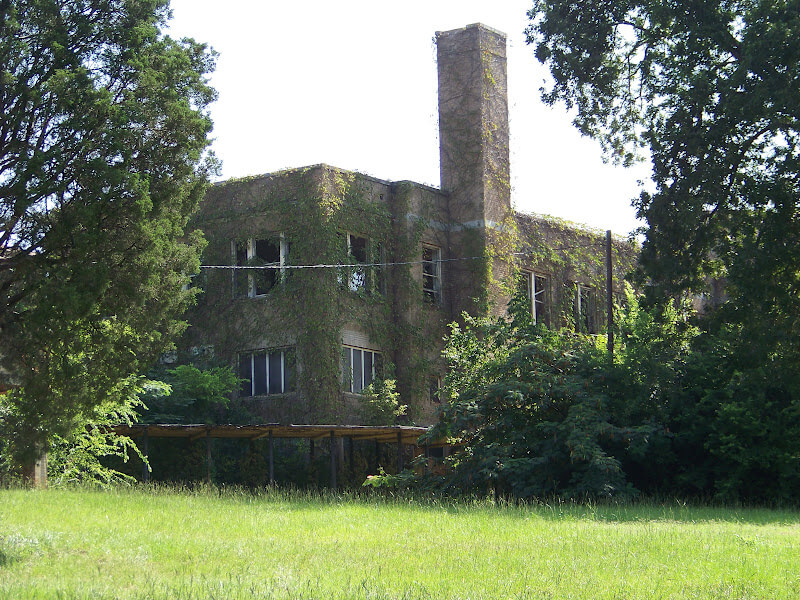 For some time it was renovated to be used as a juvenile detention center but closed down shortly after for unknown reasons. For the most part of its history, it’s been sitting empty and abandoned. Not much is remembered about the going on in the hospital but what is rumored is that the place is haunted by some mental patients who died while seeking treatment here.

If you’re on the hunt for abandoned asylums in Texas, T&P Hospital might not be your first choice but it should definitely be on your list of places to explore. Be sure to take your respirator mask as the hospital is known to contain asbestos.

Have You Explored These Abandoned Asylums in Texas?

The state of Texas is home to thousands of abandoned places. Everything ranging from homes, hospitals, theme parks, schools, and even asylums with horrifying histories are present in Texas. The abandoned asylums featured in this article are only a few of the many that are still standing today.