The Bluegrass State is overflowing with tons of incredible must-see abandoned places. It is an unexpectedly rich destination for urban explorers and adventurers alike.

Kentucky is world-renowned for its iconic bourbon distilleries, horse racing, and national parks. But lying hidden from the view of the public are the many abandoned buildings that urban explorers have been visiting for years.

From defunct sanatoriums to abandoned mental hospitals, vacant storefronts, and forgotten factories. The list below contains my top picks for the best-abandoned places in Kentucky to explore.

The Best Abandoned Places In Kentucky

The Hazelwood Sanatorium is a former tuberculosis hospital that closed down in 1980. It was the first hospital dedicated to the treatment of tuberculosis in Louisville, KY.

It was built by William Carrier Nones, an upstanding Louisville citizen who spearheaded an organization whose sole effort was to stamp out the contagious bacterial infection known as tuberculosis.

Hazelwood began in 1905 as a family house that was converted into a 10-bed hospital. Five years after it was built, it was destroyed in a massive fire. The hospital was rebuilt as a three-story building, with 120 beds.

Tuberculosis at the time was running rampant. Over 2,000 people were dying every day from the disease. Hazelwood was quickly overwhelmed with patients.

Male patients were sleeping outside the hospital in tents or in the barn. In 1945, the patient capacity at Hazelwood tripled with the addition of a new building. Capacity went from 120 rooms to 380.

In 1943, a Ph.D. student in a lab at Rutgers University developed a life-saving drug that led to a massive decline in tuberculosis deaths worldwide.

As Kentucky saw fewer and fewer patients needing health treatment, several hospitals were closed down and patients were transferred to Hazelwood.

In 1971, a section of the building that was used as living quarters for nurses was converted into a mental hospital. The new section was named Hazelwood Center for Persons with Mental Retardation.

The Young’s High Bridge is a former railroad bridge near Tyrone, Kentucky. It was used to ferry passenger and cargo trains across the Kentucky River. The bridge was constructed in 1889 and was named after the Louisville Southern Railroad President, William Young.

The Young’s Bridge is 1,659 ft in length, 283 ft above the river, and includes a 551foot long cantilever span. It was originally designed to be 5 feet lower than the highest bridge in the nation.

But instead was revised to be 6inches higher so it could claim the honorary title of being the tallest bridge in North America.

It saw its last passenger trains crossing in 1936, but continued to allow freight trains to cross safely for decades. Traffic gradually decreased in the late 60s, and some unfortunate accidents also took place.

Most notably was the derailment at the Tyron Power Station. A runaway locomotive on the steep spur destroyed several coal cars as it couldn’t stop.

In 1985, the last freight train crossed. After which the bridge was abandoned by the company that owned it. In 2013, the bridge was sold to Vertigo Bungee.

A business that offers bungee jumping excursions from bridges. It is definitely one of the coolest abandoned places in Kentucky to explore.

The massive gothic-style Waverly Hill Sanatorium was built in 1912 as tuberculosis was becoming a very serious epidemic. It was originally equipped to care for 50 patients but had to expand its capacity in 1926 to 400.

Because tuberculosis was an extremely contagious disease, those infected were not allowed to live and exist among the general population. People were isolated from the public in Waverly Hills.

It was essentially a self-contained community, complete with its own zip code. It had a water treatment facility, a post office, a community garden, a farm, and many other necessities of life.

Everyone who entered Waverly – patients, nurses, employees, etc… all stayed there and had to say goodbye to the life they knew.

With the discovery of a cure for tuberculosis in the 1940s, the need for dedicated tuberculosis hospitals declined. Waverly Hill closed its doors for good in 1961.

In 2001 a couple purchased the Sanatorium under the name The Waverly Hills Historical Society. They offer private tours with the intention to raise money for restoring and preserving the building.

If you’re looking for possibly haunted and abandoned places in KY be sure to check out Waverly Hills.

The Old Crow Distillery began producing bourbon whiskey in Frankfort in 1835. It was started by a man named Oscar Pepper. He hired James Crow to distill his famous crow bourbon there.

James Crow immigrated from Scotland and brought with him some experience in chemistry and an understanding of the sour mash process that had not been known in the US.

The bourbon was named Old Crow and earned him a very high reputation in the distilling industry.

In 1856 both Pepper and Crow died. Shortly after, Gaines Berry & Company bought the Old Crow Distillery and asked its distillers to continue brewing the same bourbon.

Keeping production going well after the death of its original creator, James Crow.

Come 1934, little had changed for Old Crow as it continued to produce its famous bourbon. Offering it nationwide and overseas. Several structural improvements were made to the distillery over the years.

It was bought out in 1987 by Jim Bean and has been used for storage and nothing more. Scrappers dismantled several columns of distillers and other metal elements in 2004.

The 7-story store, office, and warehouse building known as the Millard Field Building, had a project cost of over $100k for its construction in 1919.

It was owned by the Field Furniture Company which was comprised of 3 prominent locals.

The first floor of the building was used to sell men’s & women’s apparel. The 2nd floor was where the home fashion departments displayed their products.

The 3rd floor was designated for furniture and carpeting sales. General company offices were held on the fourth and fifth floors. The remaining two floors were only used for storage.

In 1970 a fire caused serious damage to some of the top floors. The building adjacent to Millard’s had gone out of business and was set to be demolished.

The loss of businesses in the area prompted the Field Furniture Company to sell the Millard F Field Building. 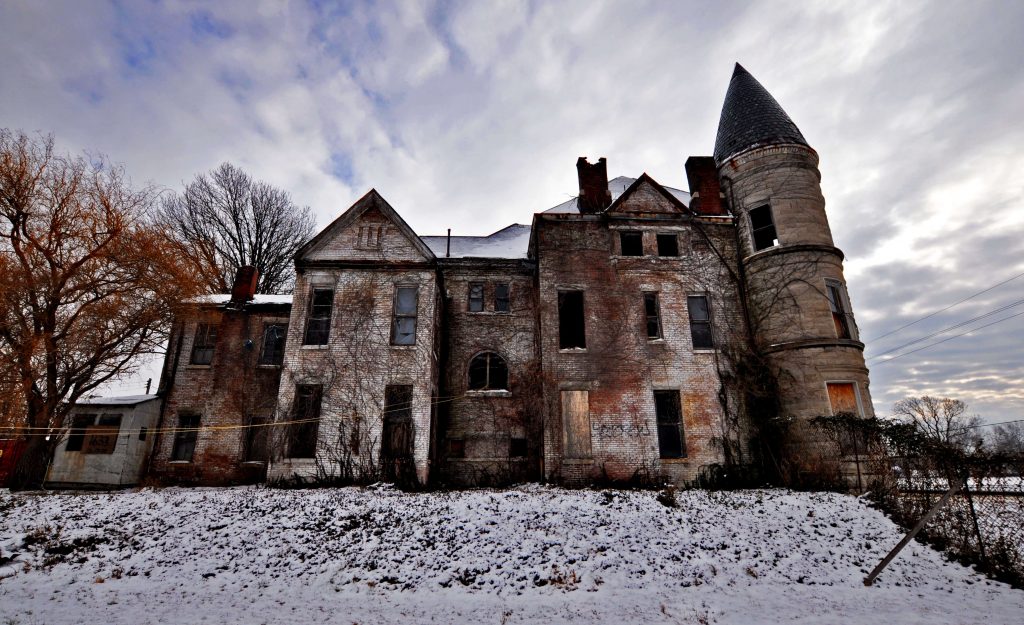 The stunning Richardsonian Romanesque-style mansion was built in the 1860s for a wealthy coffee merchant, Samuel Ouerbacker. Over the years it was turned into offices for a tax collection company named Holland Tax Services.

Holland Tax Services remained in the building from the 1930s until its closure in the 1990s. Ironically, it was closed down and seized by the city for unpaid taxes.

Shortly after, the abandoned mansion began to fall into a serious state of disrepair. It suffered severe water damage and the east wall of the building collapsed.

Since its closure, vandals and scrappers have left their mark on the building, both inside and out. In 2008 the abandoned mansion in Kentucky was sold for one dollar ($1.00) to an architect who intended to restore the building for community purposes.

Plans fell through and nothing was since done. The mansion is in a pretty bad state of disrepair. If you visit don’t make a beginner’s mistake and not take any precautions.

Hayswood Hospital is situated on a steep hillside along 4th Street in Maysville, Kentucky. It was originally built in 1915 as a seminary for young girls but was later transformed into a hospital in 1923.

For decades it provided medical treatment to residents of Maysville.

In the early 1980s, like so many other small-town hospitals, it had outdated medical equipment and could not invest in upgrading its tools.

To further add to its existing burden, in 1982 an earthquake caused serious damage to the building. It was closed down in 1983 and all of its patients were transferred to newly built medical facilities.

For nearly 35+ years it has been sitting abandoned and left to rot. If you were to visit today, you could see old furniture and office equipment still inside.

Some areas of the building are completely destroyed by vandals and scrapers. Plans to redevelop Hayswood have been brought up many times but little has been accomplished.

Russell YMCA got its start when the Chesapeake & Ohio Railroad partnered with YMCA to provide their railroad workers and community members with overnight lodging, baths, and general meeting space.

The YMCA was originally a simple 2-story building but in 1948 it had to be renovated into a larger structure as the population of Russell grew. The new building included a bowling alley, gym, barbershop, restaurant, auditorium, and rooms for over 100 workers.

Nearby residents of the Russell YMCA may remember when it was one of the most popular places in the area. It held area dances, featured a bowling alley, and hosted several community social events on a weekly basis.

Today the YMCA is unrecognizable as it has fallen into a sad state of disrepair. Broken windows, missing doors, graffiti everywhere, overgrown trees and grass. The building is also known to contain asbestos.

Opened in 1881 as the main office for the Schaefer-Meyer Brewing Company, the Merchants Ice Tower in the Smoketown neighborhood of Louisville, KY, was once the biggest brewery in the southern USA.

The Merchants Ice Towner is a two million-square-foot, 13 stories, reinforced concrete tower that had a grand cost of $1,000,000. It produced more than 50,000 barrels of beer during its peak production years.

Due to the alcohol prohibition, the brewery was shut down but was converted into an ice & cold storage facility. The company was also renamed and operated until the 1980s.

Since then it has sat vacant and has been slowly deteriorating and falling apart. The Merchants Ice Tower is a good spot to check out if you’re on the hunt for abandoned places in Kentucky to explore.

This antebellum abandoned mansion was built by prominent businessman, A.J. Hitt in 1865. A.J. owned and operated his grist flour business in Millersburg and had this beautiful Federal-style residence built just south of the city.

The home featured fine Flemish-bond brick wood and extensive wood paneling. In 1877 the home was purchased by a local businessman and friend of A.J., William Tarr. He owned the Lexington-based Ashland Distilling Company.

Tarr renovated the home to include Italianate styling and ornate decorations. Tarr lived in this house until his death. After he died, the house was occupied by the family until circa 1985. Many of the fine features of the house have gradually deteriorated and fallen apart. Today it sits completely abandoned.

Whether you live in Kentucky or you’re from out of state, making a trip to these abandoned spots should be a part of any urban explorer’s bucket list.

The locations listed above are only a small portion of the thousands of abandoned places in Kentucky anyone can explore.

Most if not all abandoned places are dangerous to explore. If you’re going to visit any of the above locations, be sure you’re carrying the right equipment. For that, you’ll need a good backpack.

Check out our list of best urban exploration backpacks. Also if you know of any abandoned places in Kentucky that are not included in the list, leave a comment below.