In a previous article, I talked about the many dangers of urbex. One specific danger that I mentioned was coming across bad people while inside abandoned buildings.

When you come across them, you don’t know how they will react. Some will turn away and simply ignore you. Others will not. Go to any urbex forum and you’ll find several stories of urban explorers being followed, verbally assaulted, and even attacked while exploring abandoned buildings.

What if something like that were to happen to you?

In the past, I’ve advocated for explorers to NOT carry any weapons with them when exploring.

But I think that was the wrong advice to give. Urban exploration is a dangerous hobby after all. So many things can go wrong. Being physically attacked is one of them. Having something to defend yourself with is the right thing to do.

If you don’t already have some sort of self-defense gear to take with you when urban exploring, below I’ll list a couple of urban self-defense items that I and many other urban explorers use and recommend. 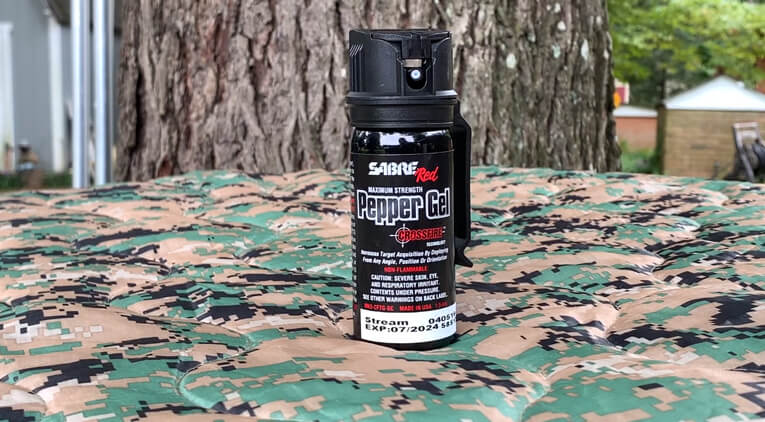 I’m willing to bet you have heard of pepper spray. You have at the very least seen it being used in movies or tv shows. Pepper spray is great and all, but there are two main issues with it.

One is that you can’t really be accurate when spraying it. The other is that there is the possibility of it blowing back in your face. It’s happened before to many people.

Pepper gel is similar to pepper spray, but it is like its more attractive cousin. With Pepper Gel you don’t have to worry about those two problems that I mentioned. Since it comes in gel form, you can be really accurate when shooting it and not have to worry about it blowing back in your face.

I personally carry pepper gel with me as I mentioned in my urbex gear post. I’ve had it for a couple of years now and I’ve only used it twice, which was just for target practice.

Simply carrying it around with me when I’m out exploring makes me feel a whole lot safer. I know this pepper gel could easily debilitate any attacker in a matter of seconds.

Which can give me enough time to GTFO of the place and run to safety. Most pepper gel has an 18-foot shooting range which means you don’t have to get too close to someone before you can use it.

It’s inexpensive, easy to use, and incredibly powerful when used correctly.

This Pepper Gel is the one I use and recommend to any urban explorer. 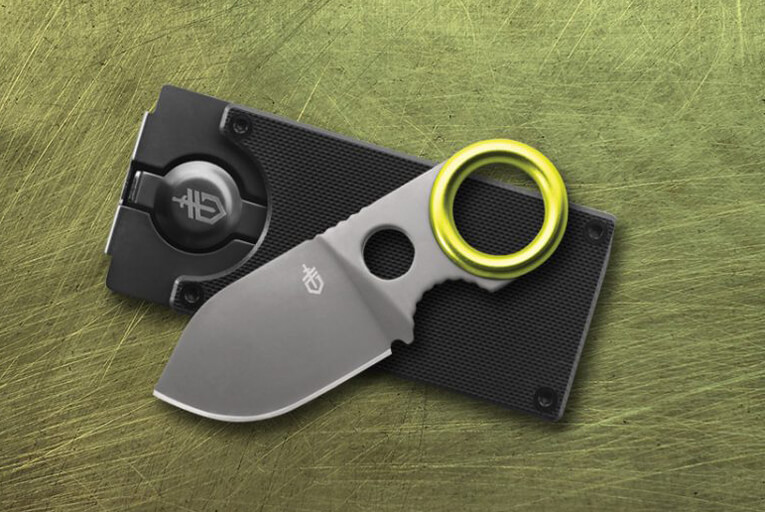 Another self-defense item that I carry with me is this nifty little clip with a built-in hidden blade. Yes, the size of the blade is small, but it’s more than good enough to save your ass in a risky situation.

The knife itself is actually made from titanium steel and is incredibly sharp. The knife is also very easy Ito deploy. A quick click of a button unlocks the knife from the clip.

The sheer sight of a blade in your hand will deter a possible attacker from even getting close to you.

What I like most about it is that the knife itself is incredibly well-hidden. This allows you to stay safe and potentially out of trouble should you be caught carrying it.

Since the blade isn’t visible without you having to press a button, someone looking through your bag would not notice the blade.

Aside from it being a great self-defense weapon, it’s also useful to have a knife when exploring abandoned places since it might come in handy in several different situations.

This GERBER Hidden Blade is a decent self-defense weapon that any urban explorer can use to defend themselves in possibly dangerous situations. 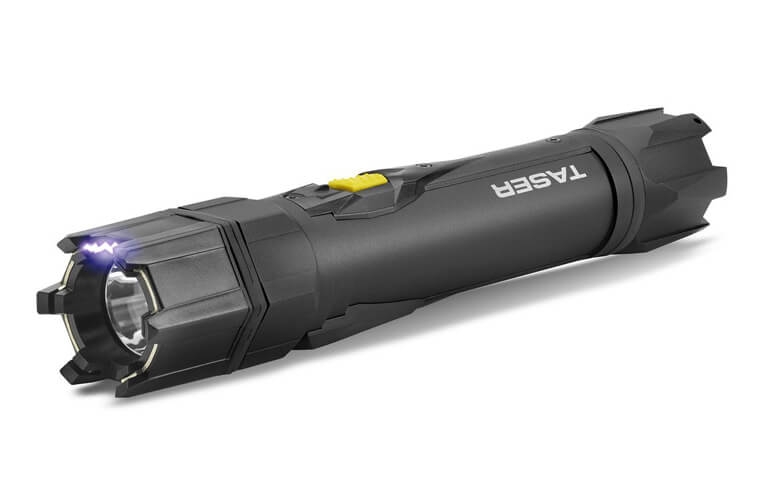 A great self-defense gear item that a friend of mine carries with him is this Taser Strikelight Flashlight that doubles as a stun gun.

He’s had it for about a year now and it’s a neat little self-defense weapon that anyone can get. What I like most about it is that its first function is that of a flashlight. Something every urban explorer should have.

But it also has a hidden feature that isn’t noticeable if you didn’t know it was there. That feature is the stun gun capability. A stun gun is one of the most popular self-defense items in the world. The main reason is that it’s incredibly effective at stopping an attacker.

You don’t even have to actually use it on someone to scare them away. The stun gun arc, which is the electricity that’s audible and visible on the taser, is enough to scare anyone away.

In previous posts, I’ve talked about the importance of carrying 2 flashlights for urban exploring. One is your main and the other is your backup.

This Taser Strikelight Flashlight w/ Hidden Stun Gun can double as your self-defense weapon and your backup flashlight. It’s a 2-for-1 item that’s incredibly useful.

The stun flashlight, pepper gel, and hidden knife are all items that if you were to be caught wouldn’t cause too much trouble for you. The knife is small, and the gel and stun are clearly for self-defense.

But there are also items that I use that I know could get me in serious trouble. But it’s a risk I take for my own safety. Below are the two items I carry when I’m exploring a place known to be dangerous.

Urban exploring is not the only hobby I partake in, I also like camping and being out in nature. If you’ve been out in the wild before, you know that a knife is a must-have item to have. Which is why I have purchased a couple of them over the years.

A knife is not only useful for outdoor activities, but also for keeping you safe. I don’t just mean safe from predators in the wild, but also from anyone who might want to attack you. That includes people.

After a particularly dodgy situation one day in an abandoned warehouse, I started exploring with my knife on me in case someone wanted to mess with me again and FAAFO.

Exploring with my knife gives me peace of mind, especially when I’m exploring a place in a dangerous neighborhood.  The main knife that I carry is the Benchmade Turret 980. This knife is capable of anything and is perfect for any situation.

I keep it clipped to my pocket for easy access and it’s honestly been a useful item to have not just for self-defense. I also have a CRKT Blade that a friend gifted me which is also cool AF and very intimidating.

Should You Carry A Weapon When Urban Exploring?

The general consensus among the urbex community is to NOT take any weapons with you when exploring. But personally, in the 10 years that I’ve been doing urbex, I haven’t met a single urban explorer that doesn’t carry some sort of self-defense weapon with them.

From small hidden knives to pepper gel, and even a gun (I don’t recommend this), these are all self-defense items that I’ve seen other explorers carry with them.

The reason that some people in the urbex community say you shouldn’t carry a weapon when exploring is that you could get into serious trouble if you were to be caught.

Remember that the hobby we do isn’t always exactly legal. Being caught trespassing and carrying some sort of weapon could get you into serious trouble. Even if the weapon you have is meant to be used for self-defense.

Every state has different laws regarding the carry of self-defense weapons. Before you consider taking a weapon with you when urban exploring, take some time to do some research and really think if that’s a risk you’re willing to take.

If You Don’t Carry A Weapon, Know This

If you decide to not carry a weapon, that’s fine. It’s your own choice and you’ve decided you don’t want to risk being caught with a weapon. You of course still want to protect yourself even if you don’t carry a weapon.

What you can do instead is take a very good look at the other urban exploration gear you carry. Some of it might have a dual purpose. If you’re a photographer, for example, a tripod can be a very useful item to defend yourself with.

What you can also do when you’re inside an abandoned building, is look around and see if you find a piece of metal, wood, or anything that you can really use to defend yourself. There’s always a pipe, tree branch, or piece of wood laying around somewhere. Pick it up and carry it with you when you’re exploring.

Urban exploration is by no means a safe hobby. I’ve said it before and I’ll continue to say it again. Your safety should always be your number one priority when urban exploring.

If you’re going to take part in this hobby, know that there is a possibility of you coming across dangerous people.

Having something to defend yourself with is ideal but it carries a major risk. The chances of you being attacked are slim but it can happen.

Take some time to think if it’s worth it for you to run the risk of carrying a weapon when urban exploring. I’d like to hear from you, do you already carry some sort of weapon with you when exploring?

What do you carry? What do you recommend to other people? Let me know in the comments!