The architecture in the city of Boston has such an amazing and well-documented history. Several thousands of buildings that still stand to this day were built decades ago.

While some are still in use, a big part of them have been left behind by society and are considered completely abandoned.

Each of these locations has its own fascinating history and if their walls could talk they would share captivating stories of what occurred in these places we now consider ruins.

Below are a few of these abandoned places in Boston that still stand today and that have an interesting past worth knowing about.

Located deep under the M.S. Steinert & Sons piano shop in Boston Massachusetts on Boylan Street, is this real-life hidden concert hall that once hosted a multitude of talented musicians in the early 1900s. It was built in the late 1800s by Alexander Steinert in order to draw more customers into their piano shop to further their business.

It worked like a charm. The concert hall attracted hundreds of new customers but most importantly it brought in the musical elites of Boston. The lavish hall was built 40 feet under the piano shop in order to draw out the noisy streets outside and offer musicians and patrons a one-of-a-kind acoustic performance venue experience.

It was built with an Italian Renaissance style layout and contained all the modern equipment at the time. For nearly 50 years the Steinert Hall was considered the most popular music venue in Boston and several famous musicians graced its halls including Fritz Kreisler, Harold Bauer, and many more legendary artists. 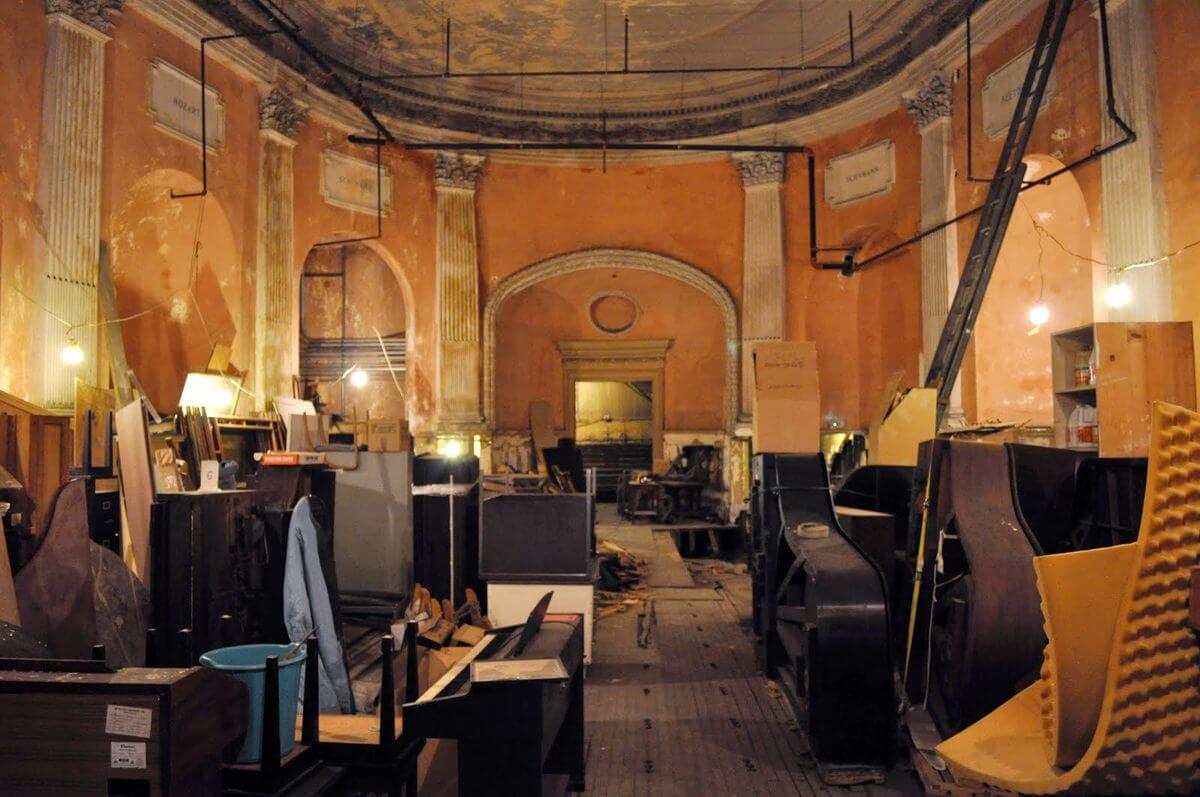 The concert halls’ golden days would come to an abrupt end due to a tragic accident in a nearby nightclub that would change the laws regarding large venues. In 1942 a massive fire broke out at the nightclub Cocoanut Grove tragically ending the lives of nearly 400 people.

After this incident, Boston created a law mandating that all large venues must have multiple exits in case of emergencies. The underground Steinert Hall was sadly not up to code and the costs to upgrade the venue were too expensive.

As a result, Alexander Steinert decided to shut down the hall instead. For half a decade the concert hall was a mecca for Boston-area musicians and all that came to an end in 1943. Since the closure of Steinert Hall, the venue now lies completely empty and forgotten, rarely seen by anyone, and only used as storage.

Because of its history, Steinert Hall has been rated among the coolest abandoned places in Boston. But entry into the venue is forbidden unless you get permission from the current piano shop owners.

It’s not every day you get the opportunity to explore a zoo that once housed dangerous predators. If you’re aching for a thrill and are looking for abandoned places in Boston to explore, the Franklin Park Zoo Bear Cages are your once chance to experience this unique location!

The Franklin Park Zoo was opened in 1912 and was intended to be an open-plan zoo designed to attract locals and tourists. The zoo was accessible to everyone who wanted to visit, free of charge. During its first couple of years, the zoo was a great success bringing in over 1 million visitors every year.

Animals of all kinds were housed at the Franklin Park Zoo such as crocodiles, lions, zebras, giraffes, hippos, exotic parrots, and of course, bears. For over 2 decades the zoo thrived and attracted millions of people to its location. But sadly the good times would not last forever.

By the mid-1930s the zoo would begin to fall into decline. Due to economic issues at the time, the city of Boston did not have the funds to keep the zoo running and opted to build a fence around the zoo and begin charging an admission fee.

The only problem was that the cages where the bears were housed were too far behind the zoo and were instead closed down and left outside the new fence. The zoo had plans to tear down the bear cages but they never got around to it.

As time went on the bear cages were simply left to rust and rot and were ultimately forgotten. They’ve been sitting empty for half a century and have become a bit of an attraction of their own for curious explorers.

In business for over 100 years, this abandoned hospital in Boston Massachusetts is now slowly decaying and falling further into disrepair. Opened in 1899 this 187-bed hospital was originally named the New England Memorial Hospital and Sanitarium.

It offered low-income families in Stoneham the opportunity for proper medical care at affordable prices. It contained a surgery hall, pediatric center, and OBGYN care, among other practices. Tragedy would hit the hospital in 1993 when an obstetrician was found in her car in the parking lot strangled to death.

Only six years later in 1999 due to financial reasons, the hospital was forced to ultimately close its doors and shut down. Parts of the hospital would remain in use but a large part of it remains completely abandoned and in total disrepair. Because of how old the building is, asbestos is present everywhere.

Be sure to carry your exploring mask to stay safe. Also, reports from explorers who have ventured inside the hospital indicate that security occasionally patrols the area, and possibly motion sensors are located somewhere in the building. Use caution if you decide to visit BRMC or any other abandoned places in Boston.

Urban explorers in Boston get the rare chance to explore this now abandoned naval base which is part of our country’s history. Established in 1941 during the ongoing second world war, it was first used as a Navy blimp base and its primary mission was to provide support for anti-submarine actions.

The blimps were used to patrol the coastlines for enemy submarines or ships while also serving other military functions. After the war, the air station expanded its operations and became part of the Naval Air Reserve Training Command, in charge of training future Navy and Marine Corps reserve aircraft service members.

In 1954 the base created the Naval Air Development Unit which was in charge of testing highly classified electronic equipment and weaponry on aircraft. It also focused on important research projects involving sophisticated radar equipment and air defense systems. 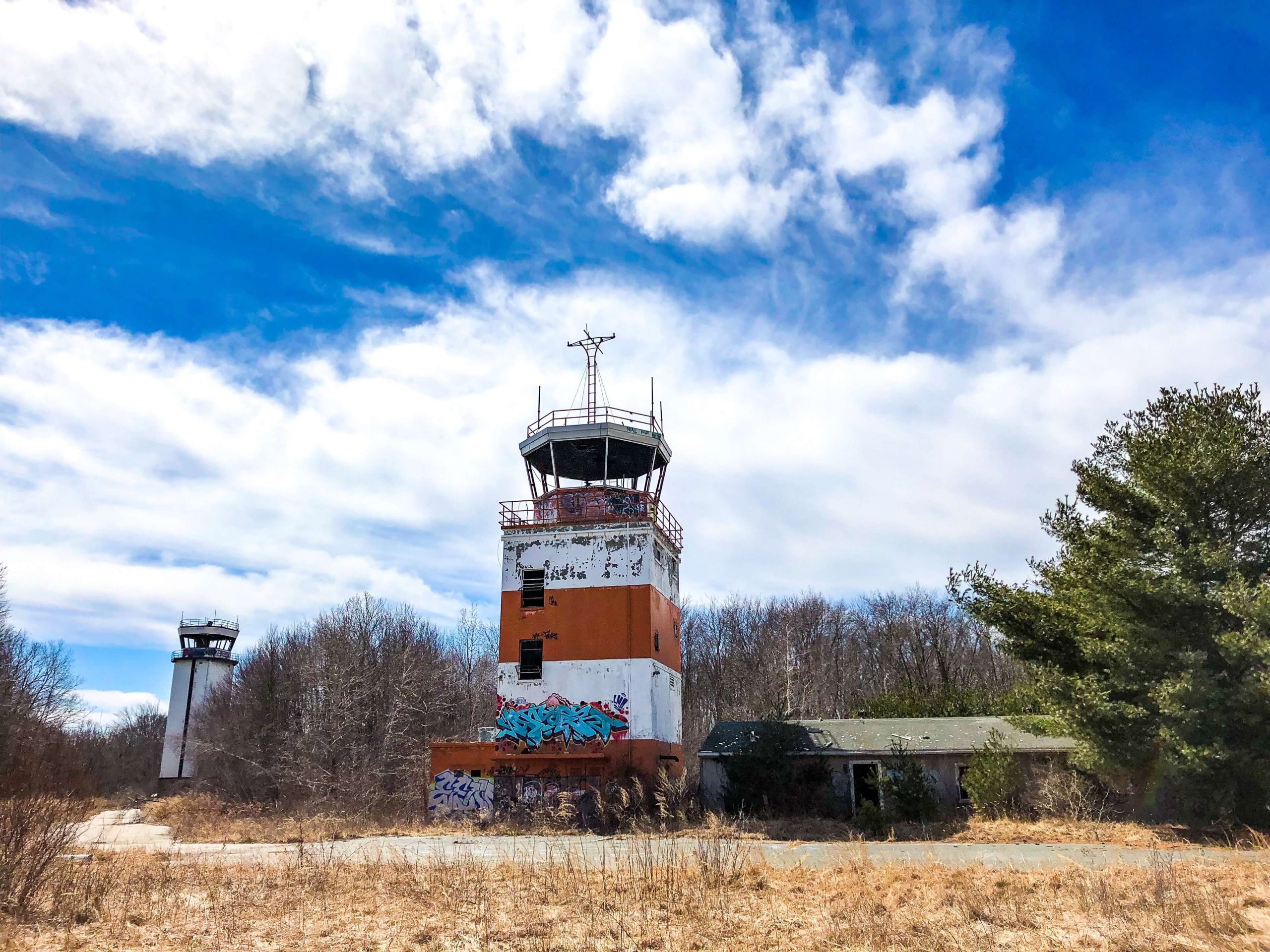 For over 30 years the base’s main function was focused on training and graduating tens of thousands of military service members and hosting a multitude of airshows. In 1995 the Base Realignment and Closure Commission directed the station to be closed down and all personnel and military equipment were transferred to a nearby active base.

Since it was closed down it was fully abandoned and part of the base was sold off to private entities. A majority of the naval base is still abandoned and slowly deteriorating away to the elements today.

You don’t have to search far or wide to find places to explore in Boston. The city has plenty of empty buildings and structures that any urban explorer would enjoy wandering through.

Finding these abandoned places in Boston is not as difficult as you’d imagine. I’ve been urban exploring for over a decade and learned many methods to find abandoned buildings, no matter where you live.

If you’re still on the hunt for places to explore, read my exploring guide. I explain in detail how I find deserted places for my explorations.