Broken windows, peeling paint, walls covered in grass – there’s something very mysterious and interesting about abandoned buildings. Tampa Florida has many of these locations. Beneath all the dust and rust, there are unheard stories associated with these empty places. From forgotten hotels to deserted neighborhoods, and entire factories, I’ve gathered some of the coolest abandoned places in Tampa for curious explorers, or photographers, to explore.

The real purpose of the Ybor Tunnels is highly debated. Some say they are stormwater sewers, while others believe they were used during the prohibition era for illegal purposes. The history of the tunnels is uncertain but the tunnels themselves do exist under Ybor City.

According to historians, the tunnels were built sometime in the late 1880s although no documentation exists on them. They are 5-feet-tall and wide, with brick walls and wooden floors. There are some who believe the tunnels were used by smugglers before and during the prohibition era.

They run for miles and several businesses and homes around Ybor city have access to them via hidden doors discovered over the years. Although the full story of the Ybor tunnels is not fully known, they remain a fascinating part of history and are considered one of the coolest abandoned places in Tampa.

This would be short-lived because of the Cuban embargo, perfecto Garcia was not able to secure Cuban tobacco and their business dwindled to the point of having to sell their brand to a competing cigar company in 1982.

Shortly after its acquisition, the factory was shut down and operations were relocated across the country and the factory was again sold to new owners which have left it empty and forgotten ever since.

The abandoned water tower at Sulphur Springs has a long and sad history. The 214-ft tall tower was built in the 1920s by businessman Josiah Richardson. The water tower’s purpose was to create additional water pressure for the pools on his Sulphur Springs Hotel and Resorts.

The cost of building the tower would be too much for Richardson and he would go on to mortgage his resort to fund the build. A few years later the great depression swept the nation completely halting tourist visitation to his resort. Bookings at the resort would stop completely leaving his business empty for years.

The resort would go on to be demolished leaving the water tower intact. In the following years as people were still suffering from the national economic collapse and losing their homes, some would sadly go on to end their own lives by jumping from the top of the water tower.

Due to these terrible tragedies, visitors to the tower would start to report seeing ghosts or apparitions when nearby. If you’re on the hunt for creepy abandoned places in Tampa, the Sulphur Springs Water Tower is a must-see. 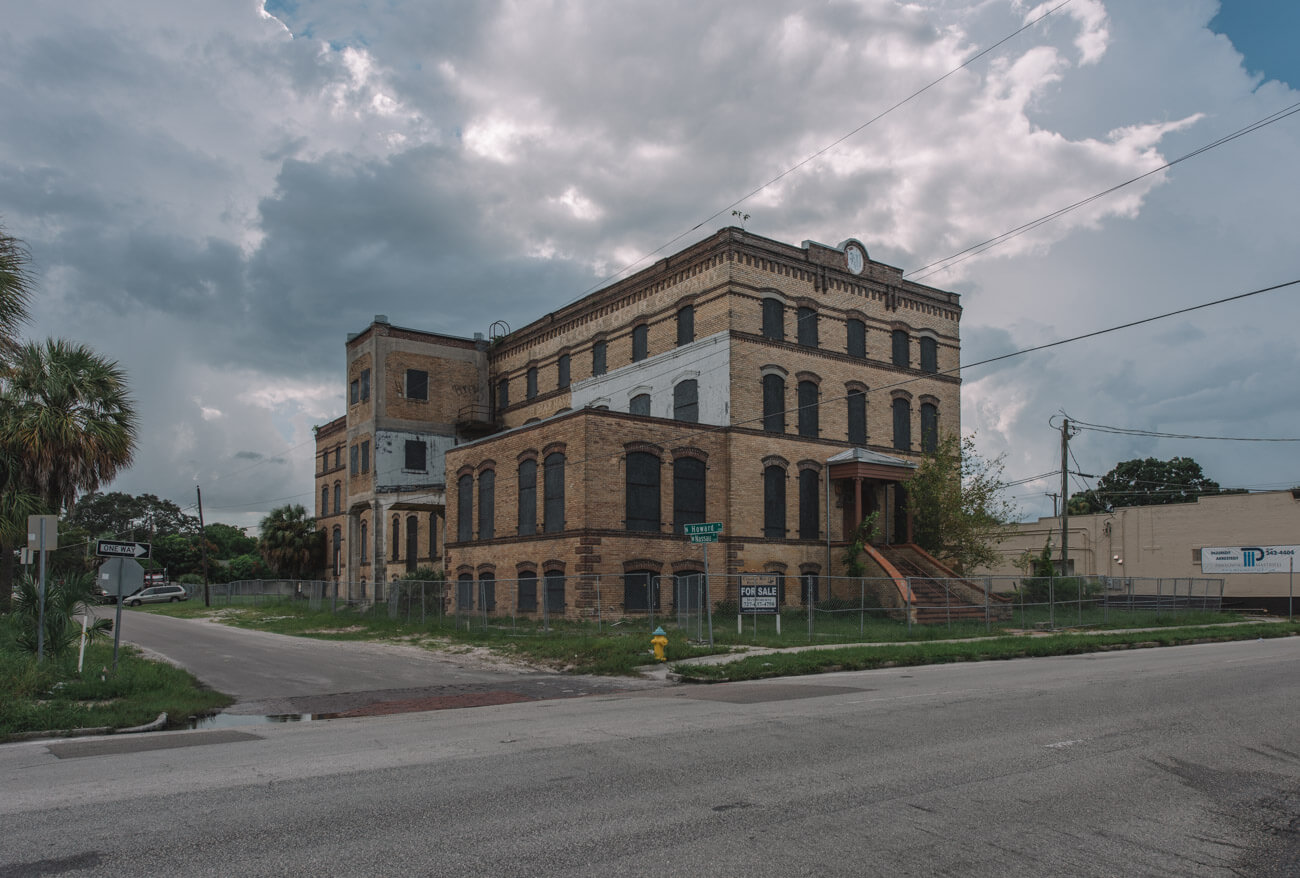 Considered among the last surviving cigar industrial buildings in Tampa, the Balbin Brother Cigar Factory has a history dating back to the early 1900s. Constructed in 1904, this three-story brick Romanesque Revival building was acquired by the Balbin brothers to expand their cigar business in Florida.

They produced some of the best hand-rolled cigars in the Southeastern United States until the onslaught of the Great Depression. With the decrease in sales due to economic collapse, the Balbin brothers were forced to close down shop in 1934. The building was purchased and converted to a brewery which also closed down shortly after.

In the following decades, several other businesses would occupy the building until it was ultimately abandoned in 2005. Attempts to restore and modernize the now-abandoned factory have been made over the years and are ongoing but no changes have been made. It’s considered one of the coolest abandoned places in Tampa.

This factory was owned and operated by Samuel L. Davis who was a native New Yorker that learned the cigar business at an early age. At the age of 24, Samuel already operated factories around the US and expanded his business to Tampa. He purchased this factory and renamed it, running it successfully for many years.

After his death in 1918, his business would go on to merge with 6 other brands to create a single brand called El Sidelo Cigars. These high-quality cigars were hand-rolled at this factory until 1924 when production would cease indefinitely. The business would be moved to New York and the factory would be left empty and abandoned. The building has been vacant for decades with no plans for renovations.

Who knew Tampa Florida would be the perfect place for urban exploring. Hundreds, perhaps thousands, of abandoned buildings are found all throughout the city. Some are hidden in plain sight, while others are lost to mother nature reclaiming the ground they stand on.

Regardless of where you look, you can certainly find many abandoned places in Tampa. The locations featured in this article are a tiny portion of them. If you’re still on the hunt for more abandoned buildings in Tampa, check out the article I wrote on how I find places to explore.

Can’t Explore In Tampa? Check Out These Other Places