Whether they’re fully intact or withering away, there is inexplicable beauty to be found in places that have fallen into ruin. A building’s decaying remains tell of stories and memories that once existed inside the now deserted walls. Abandoned buildings can be found everywhere.

In every city, along long stretches of road, some are left behind in the middle of nature. If you’re someone who seeks these places whether to explore or photograph, you will have plenty to choose from in the city of Charlotte.

Below I compiled a list of abandoned places in Charlotte NC that should be on your map.

Abandoned farmhouses always give off a creepy vibe for some reason. They tend to be old and are always located far away from urban areas and surrounded by trees. When they are abandoned and nature begins reclaiming them, the place could make the perfect setting for a horror movie.

That’s the vibe this little-known Paterson family farmhouse gives. It was found and explored by popular explorer, Kappy, for his YouTube channel and the house looks both stunning and frightening. It is one among the many abandoned places in Charlotte that have been left to decay.

The two-story house was built in 1835 and has been in the Patersons family for years. The Patersons were a business family in Charlotte that owned and operated multiple restaurants.

It is not known why the house was abandoned but it has been sitting empty for many decades.

It’s sad to see it just waste away as it has. Both the inside and out are in terrible condition while the main structure is unstable and slowly falling apart.

Also Read: Abandoned Places in Fayetteville That You Should Explore

If you’re looking for abandoned places near Charlotte NC, the Heritage USA hotel is not too far out. This deserted 21-story hotel was built to become part of a Christian-themed amusement park but was never finished amid fraud scandals.

In the mid-1970s popular televangelists, Jim and Tammy Faye Bakker were gaining massive attention from Christians around the world. To capitalize on their fame, they had a vision of creating a religious theme park that would bring in visitors in the millions annually.

The park was set to include 2 other structures aside from the hotel but they were never constructed. Just six months after the hotel was being constructed, work was stopped, and plans to finish the hotel were scrapped entirely. 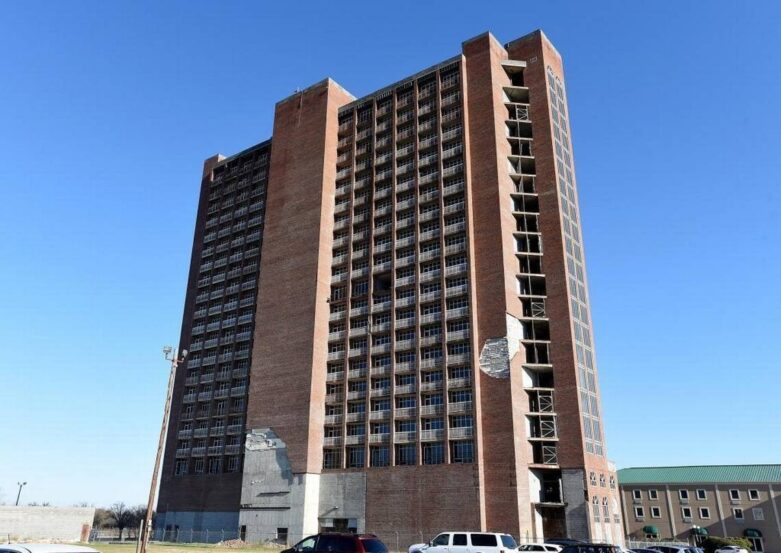 This came after the preacher and owner Jim Bakker resigned from his position in the church. He was accused of sexual assault by his secretary and his church’s tax-exempt status was revoked due to financial fraud. The Heritage USA Hotel was never finished and left abandoned.

In 1989 hurricane Hugo made landfall in Charlotte and badly damaged the building. Locals have for years been calling for it to be demolished but so far nothing has been done and the hotel remains standing to this day. It is considered among the tallest abandoned places in Concord NC.

Located on East Independence Blvd, the coliseum center was once home to a number of thriving shopping stores for many years. It included a K-mart, a wallpaper company, a salon, a Big Lots, and several other small outlets.

It was built in 1964 and started losing traction a few decades after. Shortly after stores began closing down in the center, vandalism became a serious issue.

Windows of businesses were broken and break-ins would result in destroyed property causing severe damage to many buildings. Several attempts have been made over the years to sell the coliseum center but have been unsuccessful.

This creepy abandoned school near Charlotte North Carolina has a history of abuse and neglect towards its students. For starters, the Stonewall Jackson School was built to house young juveniles who were not old enough for adult prisons.

At the time, minors were treated with the same harsh level of punishment as adults and were sentenced to hard labor. When local reporter James Cook saw this happening, he petitioned the government to treat and house young convicts in a separate location.

Stonewall Jackson School was built in 1909 as a result of his efforts. The school was established to rehabilitate students instead of punishing them. In the many buildings of the school, up to 500 students were taught trades such as farming, barbering, shoemaking, and car mechanics.

For decades the school ran successfully, it was during the 1950s when stories of abuse were coming out. Students who continued to misbehave were supposedly placed in a spot called ‘Cottage 13’. This room was said to have been run by a particularly evil teacher.

It was common for people to hear cries and shouts coming from this room throughout the day. Unconfirmed rumors that there are bodies of students buried somewhere on the property circulate online but no evidence of being true has ever been found.

In the latter half of the century, social attitudes towards minors changed greatly and juvenile training schools like this one gradually lost funding forcing them to close down. Today the school is surrounded by a barbed-wire fence and some of the buildings are falling apart.

It is considered one of the spookiest abandoned places in Charlotte NC.

If you don’t mind some light hiking through a wooded area, these abandoned farmhouses would make for a great photoshoot location. The history of the homes is not fully known but the property was owned by the Grimly family up until the 1950s.

It must’ve been abandoned with things still left inside because you can clearly see some family items laying around. One of the homes was set on fire and most of the structure was destroyed.

Another of the homes is slowly falling apart due to old age. Not surprising considering the homes date back to the 1890s. There are multiple of these old homes around the property all decaying and fully reclaimed by nature.

Have You Explored These Abandoned Places in Charlotte NC?

There is beauty in decay and these abandoned places in Charlotte NC are proof of that. The locations I featured here are a sample of what you can find if you’re looking for forgotten places in your city.

To find more of these sites you’re gonna have to do some exploring … on Google Maps. If you don’t know how, read my exploring guide where I show you how to discover abandoned places.